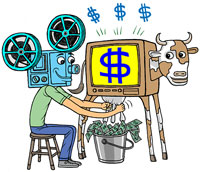 The ways that Hollywood loses money is the red meat of news reporting on Hollywood. The headlines screamed in early 2012:“Movie attendance falls to 16-year low,”;“Hollywood in turmoil as DVD sales drop,” and “John Carter Financial Disaster For Disney.”
What goes largely unreported, however, is that the studio have found other ways to make money. Despite all the hand-wringing in the press over losses, the 6 major studios made record profits. Consider Disney for example. Despite the“John Carter” fiasco, the studio made record profit in fiscal 2012. How is this possible? The studios have found new ways of making money.

1. They are licensing to new media. Since 2010, there has been an explosive growth in license fees for studio-owned TV series, both still-on-the-air and older ones. The big studios have tens of thousands of TV episodes, movies, and animated shorts in their libraries. Price is soaring as the competition heats up between Amazon. Hulu, and Netflix. And they are buying exclusive rights to compete which each other. As a top Warner Bros executive recently wrote me, “license fees that were chump change two years ago are now mind boggling.” Since studios do not pay for advertising or prints on licensed material, almost all the revenues, except for residuals, goes directly to the bottom line. As a result, the surging license fees have more than compensated for the decline in DVDs.

2. They are also turning Video-On-Demand into another bonanza While pay-per-view never before produced substantial profits, the proliferation of cable VOD have suddenly made this profitable. By 2012, studio lawyers were working at a feverish pace making agreements with cable networks to carry their new movies, such as the ones which now can be downloaded via HBO and Comcast on iPads, phones and other digital devices. The money that is flowing in from these deals is expected to adds hundreds of millions of dollars to the studios’ bottom lines in the next two years.

3. They are also improving foreign yields. The Hollywood studios have found that their 3-D comic book and fantasy movies have such enormous appeal in many developing markets, such as Russia, China, South Korea, and Brazil, that they have succeeded in jacking up their share of the box-office. In China, for example, which now has 2500 3D screens, the studios have raised their cut on these blockbusters up from a measly 13 percent to 20 percent. They have also pushed their yields up in many other new markets. Since a single comic book movie, such as Disney’s Avengers can generate over three-quarters of a billion dollars overseas the increase in the foreign yield results in a windfall (Marvel’s The Avengers, for example, took in to date $84 million in China, $63 million in Brazil, $43 million in Russia, and $51 million in South Korea.) So even though the US box office revenue was down in 2011 by 4 percent, the big studios were actually able to make more money as their share by getting higher yields abroad.

4. Studios have also managed to reduce actual production costs by paying stars only a fraction of their official “quote” or asking fee. In exchange for having them sigh a “side letter” in which they agree to the cut, studios allow them to claim they got their full fee in the contract .For example, a big name star may have a quote of $10 million, which is inserted in the contract, but he or she will be paid only $2 million. The $8 million vanished through a side letter which the star simultaneously signed relinquishing part of the sum in the contract. Since side letters are kept secret by studios, the star can pretend to receive far more than he does. . Stars accept these drastic cuts because they (and their agents and business managers) would rather make a fraction of their quote than no money at all, as long as the world does not find out. For studios, these side letters substantially decrease the cost of making movies

5. Hollywood’s biggest under-the-radar profit center is television. The major studios (with the exception of Paramount) produce TV series for network and cable television. And cable has become an exceedingly rich lode. The A&E network alone is now valued at over $20 billion. As these cable networks largely rely on Hollywood for their filmed entertainment, they have become its cash cow. A top Time Warner executive recently calculated that over 85% of the company’s profits come from TV.
So don't cry for Hollywood yet.
Posted by Edward Jay Epstein at 12:58 PM